Every Day is a New Day 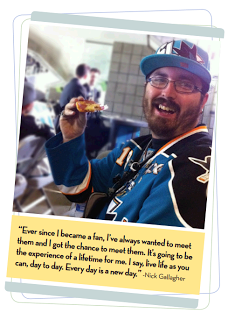 Walking into the Gallagher home in Aptos is like walking into a sports museum. A ceiling-high glass case holds jerseys, caps, pennants, and countless other memorabilia from the San Jose Sharks and San Francisco Giants. But the standout item is the Sharks hockey jersey bearing the name “Gallagher,” a memento from the evening in May when the dream of a lifetime came true for 28-year-old Nicholas Gallagher, a Hospice of Santa Cruz County patient battling brain cancer. On that unforgettable night, Nicholas and his family were VIP guests of the Sharks, front and center at a playoff game. The dream became reality courtesy of the Dream Foundation through the efforts of Hospice of Santa Cruz County social worker Robin Spring, who submitted the application on behalf of Nicholas, known as Nick to his family.

During a visit with Robin a few weeks after the big event, Jan Gallagher, Nick’s grandmother and caregiver of many years, talked about what that special night meant to Nick and his family. “Nick is just such a positive guy, and he’s been so very excited about all of this,” she shared. “It’s just boosted his ‘get up and go.’” Nick indeed was still glowing, all smiles as the family reminisced and passed around photos of the night at the game when they helped cheer their team to victory. “He’s been wanting to meet them all his life, and he really felt like a rock star that night,” Jan added.

On the evening that the red carpet was rolled out for Nick and his family, they were picked up at home and escorted to the HP Pavilion in a limousine. They had dinner alongside the Sharks staff and NHL broadcasters, then watched the Sharks warm up on the ice. Just before game time, Nick was escorted outside the Sharks locker room where from his wheelchair he high-fived the team members as they skated out through the giant shark head to start the game. But the highlight may well have been intermission, when Nick was invited to ride atop the Zamboni ice resurfacer. As the Bay Area NBC news outlet featuring Nick’s story put it, “He might as well have been sitting on top of the world...looking up at the crowd...soaking it all in.”

“Ever since I became a fan, I’ve always wanted to meet them and I got the chance to meet them,” Nick told reporters that night with a big smile on his face. “It’s going to be the experience of a lifetime for me. I say, live life as you can, day to day. Every day is a new day.”

Nicholas Gallagher died on June 28, 2013, in his home surrounded by his loving family. We are grateful to Nicholas, his grandmother Jan and his father Matthew for sharing the beautiful story of their experience. The Hospice of Santa Cruz County care team was honored to provide care and support to the Gallaghers – it was a privilege to help make Nicholas’ dream come true.