The first year that her two sisters decided to attend Camp Erin© Santa Cruz, 15-year-old Rosie Ceja, was skeptical. She had never been to a sleep-away camp before and the idea of leaving for a few nights was scary.

So she skipped it. 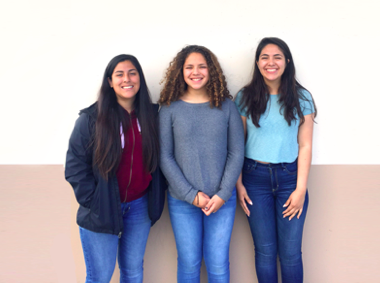 When her sisters Emily and Lily returned though, she noticed something different about them. They were lighter. They spoke about the loss of their father in a different way. Their mom noticed a difference, too.

“After you lose someone, you have anger inside. I think a lot of people don’t realize that. They think you’re just sad, but no, there’s also a lot of anger,” The girls’ mom, Maria Ceja, says. “After they came back from camp, they had released some of that anger. I don’t know how, but they did. They better understood why they were feeling so many different emotions. They released anger, some of the sadness, and they felt a lot better. The pressure was gone.”

The next year, the sisters returned to camp…and Rosie joined them. 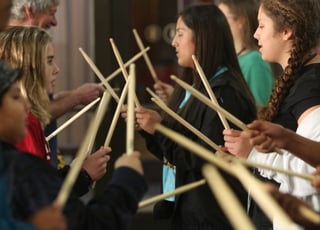 Located at Mt. Hermon Redwood Camp nestled into the magnificent Redwoods, Camp Erin Santa Cruz is an adventure-filled weekend with ziplines, archery, drum-making, and more. The sisters loved the ‘calmness’ of being in nature, as well as the delicious foods (“like French Toast and eggs!”) that were served.

Emily, Rosie, and Lily are sisters who are no stranger to activities. Their combined creative pursuits include film, cinematography, music, photography, and drawing. The eldest sister Emily admits being pleasantly surprised by all the activities: “I thought we were just going to do a lot of talking, or a lot of listening to someone speak, but it was a lot of working together and doing group activities.”

When it comes to children and teenagers, there are many useful ways to approach grief.

“Grief hits us on so many levels,” says Amy Marlo, Children’s Program Coordinator at HSCC. “We may partly process it verbally, but what’s happening beneath the surface is expressed in a variety of nonverbal ways that are equally important, equally powerful. With kids, you can tap into those nonverbal expressions through an engaging activity. Some kids open up through art, others through movement, different activities provide different outlets for healing.”