How to Shoot a Photo to Remember 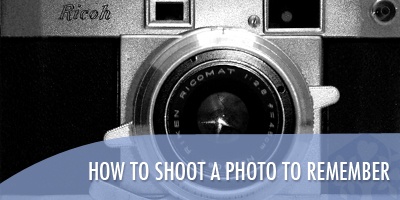 Sometimes the realization comes almost too late — you sense that your parents or other loved ones may soon be gone, and it dawns on you that you don’t have any recent photos to remember them by.

Sure, you might have a few photos of them in their youth, before you even knew them. But what about a photo of them now, so you can remember the person you have come to know so intimately over these years of caring for them?

Those photos are harder to come by. As readers of this blog know, those of our parents’ generation did not grow up with a camera in their pockets to record every moment with friends on Facebook.

A lot of people who are now elderly “only have a high school senior photo – they don’t ever visit a photographer again,” said Steve Bedell, a professional photographer in Dover, N.H. “That’s why it’s so important to document these people at an older age.”

Mr. Bedell began doing just that several years ago, when his mother-in-law moved into a nursing home. He found the process so moving that he eventually took photos of 30 of the other residents, too, at no charge — to the delight of the residents and their families.

You don’t have to be a professional to take a memorable photo, of course. But snapping the elderly involves some unique challenges. So I consulted several experts in this area for their tips.

One thing they all agreed on: It’s never too late. Even if your relatives are frail or suffering from dementia or in the hospital or a nursing home, there are still ways to capture the essence of who they were and, beneath the lines and curving spines, still are.

Here’s how to take your best shot.

1. Help your loved one get dressed for the occasion.

“Hospital gowns depersonalize a human being,” said Dr. Jeffrey M. Levine, a geriatrician at Beth Israel Medical Center in New York who has been taking photos of the elderly across the country for decades. (See his Web site and many of the pictures in the slide show at the top of this post.) If dressing is not an option, at least help cover the person with a favorite shawl or quilt to add a personal touch.

“My father loved to put on hats and scarves and have his picture taken all bundled up,” said Susan Sermoneta, an English teacher at the Fashion Institute of Technology who spent six years photographing her father (some of the results are posted on her blog) until he died in February. Women, especially, may feel more relaxed in front of the camera if you’ve helped them apply some makeup or they have had their hair done (many nursing homes have salons).

2. Shoot in a cozy room, or at least in a comfortable position.

If your relatives are at home, find the room that makes them feel relaxed, like the kitchen. If they’re in a hospital, try to catch them when the hospital staff is changing the bed linens; they often move the patient to a nearby chair. Lying in a bed makes anyone feel weak and exposed.

3. Be sensitive to quirks and vulnerabilities.

If they have injuries or scars or IV tubes that make them self-conscious, reassure them that you’ll try to keep those things out of the photo.

“My father thought profiles were his best angle, so he would pose that way — always with his hands crossed over his chest,” recalled Ms. Sermoneta. “I asked him why, and he said, ‘If I don’t hug me, who will?’”

4. Bring in friends or other family members to engage with the person.

Never say “cheese!” Interacting with others will help animate their features and make them look — and feel — more cheerful and lively. Grandchildren and babies can be especially handy for eliciting natural smiles, said Mr. Bedell, “as long as you can control the grandkids” and send them home before everybody is exhausted.

Music is relaxing (for the photographer, too), but for those with dementia, it also can sometimes spark unusual focus and clarity. (See “Revived by Music”, a blog post by my colleague Paula Span.)

“One elderly nun I photographed had lost her ability to speak because of dementia — but if you brought her to Mass, she could sing the hymns,” recalled Dr. Levine. “It connects dots in their brain and gives them a sense of well-being.”

6. Hand them a memory prop to get them talking.

Sometimes all it takes to get even elders with dementia talking happily about their lives is to have them hold an object that stirs up memories.

“I had a patient who was a fireman who kept a toy fire truck and the awards and medals that he had gotten,” said Dr. Levine. You should be careful with war memorabilia, though, Dr. Levine warned, as it may agitate some veterans.

7. Ask simple questions that play to their strengths.

Sometimes just asking about what games they played as children can trigger some great conversations. Questions that remind older people of who they used to be when they felt strong and independent can produce lively responses.

Dr. Levine recalled visiting an uncle with severe dementia who had been a doctor. “He still loved playing doctor,” said Dr. Levine, “so I asked him about a blood clot I had under the nail from slamming it in a door, and he grabbed my hand to examine it as he had done when I was a child.”

“You don’t want to have a big flash popping off in their faces,” said Mr. Bedell. It’s distressing, and the harsh light makes everybody look worse.

To use natural light, have your subject sit near a window or take her outside in the shade of a tree to get soft, even lighting. Remember, your subject should be facing the source of the light while you, the photographer, keep your back to it.

Resist that temptation, even though it may be one of the few times in the day when a very sick person is awake and alert. “They look really weird,” said Ms. Sermoneta. Not surprising – who does look their best when chewing?

One of the big mistakes amateur photographers make, according to several of the pros, is that they are reluctant to get close enough.

That doesn’t mean you should stick the camera in your subject’s face. “I use a Telephoto lens so I can zoom in tight with just the head and shoulders filling the frame,” said Mr. Bedell. Even most standard point-and-shoot digital cameras have a zoom feature.

11. Know when to eliminate or include the background.

If your loved one is in a hospital or institutional setting, all those dangling wires and flashing machines can be just plain sad. Obscure that background by focusing closely on the person’s face (see Tip No. 13).

But sometimes people’s environment can provide the critical details you’re looking for to reveal their character and capture their spirit. “I photographed one nursing home patient who made herself a little shrine with angels, and a couple in Santa Fe who surrounded themselves with objects in their home that they loved,” said Dr. Levine.

12. Focus on body parts for variety.

After you’ve done the more traditional portrait, zero in on the parts. (Yes, sometime the sum of the parts is actually more than the whole.) “I like to zoom in on the hands, the eyes, maybe even shoot from behind or at other odd angles,” said Ms. Sermoneta.

“People always say to me, ‘Oh, I wish I had taken photos of my mother or father.’ Just take them!” said Ms. Sermoneta. Hundreds of them. “If you take enough, you’ll get one that feels true.”

“I used to schedule 20 minutes for each person, but I found that the first 10 minutes is usually enough,” said Mr. Bedell — that is, unless you have friends and relatives around interacting with them.

In that case, you’re as good as invisible, so you can keep on shooting discreetly for as long as the subject’s energy — and yours — lasts.

15. Use these photo sessions as a chance to connect.
When you ask questions about your loved ones’ past, you’re not just getting them to look lively. You’re opening up an opportunity to discover things you may have never known.

For those whose relationship with a parent may have been awkward or troubled, examining the parent through a camera lens — instead of through the eyes of a vulnerable child — can provide the distance that, paradoxically, can bring you closer.

“My father was always hard to talk to — he was a drunk and sarcastic. Then he had dementia,” Ms. Sermoneta said, which made communication even harder. But she found that taking pictures of him gave her a way to see him more sympathetically and connect with him, without words getting in the way.