Because of the generous support of our community, Hospice of Santa Cruz County hosted our first weekend camp for grieving children, Camp Erin© Santa Cruz, last fall. Nestled in the redwood forest at Mount Hermon Redwood Camp, the weekend was filled with both healing and fun activities for the 40 campers in attendance. Campers brought photos of their special person to include on the memory board. They gathered in small groups and, with the support of trained volunteers and staff, discussed their feelings of grief and loss. Interspersed with these healing activities was a lot of fun – ziplining, swimming, art projects and an adventurous ride on the Geronimo Swing.

Bernice’s Story
As we gear up for our 2015 camp, we continue to check in and connect with our camper alumni. Eleven-year-old Bernice attended Camp Erin Santa Cruz County on the recommendation of her school counselor. After her father’s sudden death in an auto accident in 2010, Bernice had suffered from nightmares. Her mother had worried that Bernice had become withdrawn. 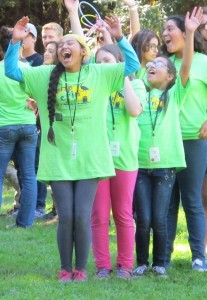 “When something happens, you don’t want to just tell everything to people,” explained young Bernice. Sometimes you keep it in and it can be difficult to open up again.” At Camp Erin, Bernice was in the company of 14 other children who had lost their fathers. For many of the children, this was the first time they had met other people their own age who had experienced a similar loss.

Camp Erin has proved to be an important part of Bernice’s healing journey. “It’s amazing because you have all these people there that are in similar situations, and they understand what’s happened,” explained Bernice. “All of the kids supporting each other and getting to know each other and learning how to interact. It’s a really great environment because people respect what you do and don’t want to do,” she added.

Fourteen Big Buddies attended HSCC grief support training and considered their own losses so that they could best support the campers. “It means so much that the volunteers and staff want to help,” shared Bernice’s mother, Yadira. “They are so well prepared and really care … they have such big hearts.”

Today, Bernice still feels the sadness of losing her father, but she doesn’t feel as alone. “I would have never met all these wonderful people, and I would still feel heavy if I didn’t go to camp,” she told us.
“I would have everything jumbled up inside me and I would feel like I should be closed up and not have people see that side of me,” she added. Yadira agrees that HSCC and Camp Erin has made a difference in Bernice’s healing. “It’s a wonderful experience and very helpful for the children and for the parents,” she said.

HSCC’s Camp Erin is free of charge to all children and teenagers ages 6-17, who have experienced the death of someone close to them.  Our next camp is October 9-11 at Mount Hermon Redwood Camp. Applications are now available on our website www.hospicesantacruz.org/camp-erin. Please help spread the word about Camp Erin.

Camp is available to children and teens in Santa Cruz County, the greater Monterey Bay, Silicon Valley and other areas. 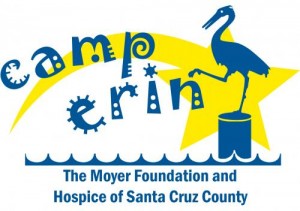